I am a celebrant with Spiritual Ceremonies of Ireland and can perform legally binding weddings.

I can perform a legally binding Wedding Ceremony or facilitate a Wedding Blessing and a Renewal of Vows Ceremony.

A Wedding with Spiritual Ceremonies is a non-denominational ceremony which can be tailored made to suit every couples needs for a magical day.

A Spiritual Wedding Ceremony can take place on any day of the week including Saturdays, Sundays and Bank Holidays. 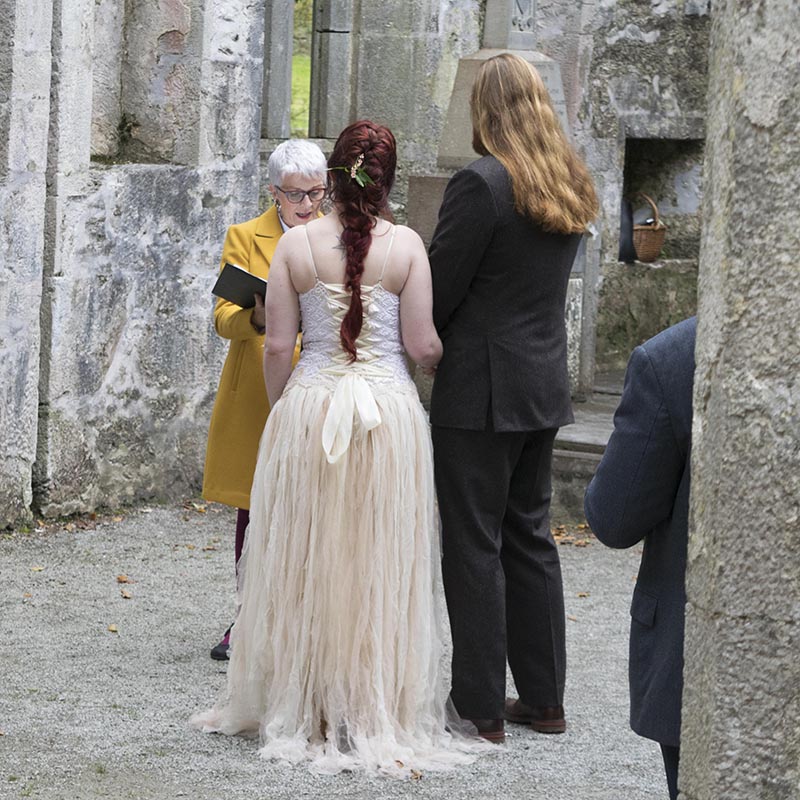 I am also available to celebrate the following events

While many families will go down the traditional route of having a Communion for their children, there are a growing number of families who do not wish to follow this route for their children. However it is an important time of the child’s life as it is a time of growth, of independence, becoming aware of responsibilities in their life for the first time and an awareness of self in the world that we live in.

Parents can still mark this phase of their child’s life with a celebration that is non-religious.

This message is only visible to admins:
Problem displaying Facebook posts. Backup cache in use.

Spiritual Ceremonies has been an advocate for equality since its inception in 2010. Over the past ten years we have been proactive in the Wedding Industry in endorsing and promoting equality for the couples we work with and as such participate in many social Media Platforms and Wedding Groups in an effort to guide and offer advice for couples preparing for their special day. One of these platforms was Weddingsonline.ie & their associate HIGM facebook group on which 14 of our celebrants were listed. Since 2017 we have paid thousands of euros to Weddingsonline and have been increasing the number of celebrants we had on their site each year. As part of our subscription plan, we did an Instagram takeover last Thursday 27th August. We provided Weddingsonline with a video and images of our couple’s weddings, same sex and opposite sex. Weddingsonline posted the photographs on Instagram, but then removed the same sex couples’ photo that we had included a few hours after it was uploaded. On 28th August at 10:04, we queried why this post was removed. Having received no reply, we followed up at 14:07. We were told it would be investigated. On Monday 31st August at 10:50, we were told the reason it was removed was due to the scheduling app they use where some posts “disappear”. We were offered an additional post on the HIGM page “by way of apology”. At 13:19, we agreed to the additional post on HIGM Facebook Group but also asked that the photo of the 2 brides and post that was removed from the Weddingsonline Instagram account to be put back up. We asked that the post be updated to include the same sex couples’ photograph. This was not done.

Instead on the 1st September Weddingsonline cancelled our subscription, before our contract expired and which has been paid in full. They further blocked all of our celebrants from the HIGM Weddingsonline group facebook page (where our celebrants interacted and gave expert advice to couples organising their weddings). They then emailed us to say they did not wish to renew our subscription as they do not “wish to promote” our religious beliefs and the core beliefs of Spiritualism. All of our Celebrants are Registered Solemnisers of the Spiritualist Union of Ireland. There are other faith based celebrants listed under Spiritualists, with exactly the same beliefs and offering services like that of the Spiritualist Union of Ireland, advertising on Weddingsonline and yet they have continued to be permitted to advertise on their platforms.

Spiritual Ceremonies have always been an inclusive organisation embracing all faiths, cultures, beliefs and sexual orientations. This is encapsulated in one of our slogans “We Are All Equal in Love”. Many members of our celebrant team are also members of the LBGTQ community. Not only is this act by Weddingsonline disrespectful to each individual's right to have a belief system, which is protected under the Irish Constitution, it is also disrespectful to each individual's rights to equality alongside other inalienable rights to their beliefs on the basis of sexual orientation. Looking at the Real Wedding Section on Weddingsonline, (currently all 97 pages of them) shows a blatant lack of equality, not one real wedding listed incorporates a same sex couple. Simultaneously neither does their Instagram account!

We therefore ask all of our couples and fellow suppliers to voice their opinions on the matter to Weddingsonline. An industry which should be promoting and endorsing inclusion on the basis that love makes us better individuals. However this is not the case with Weddings Online. For example on the historic day of monumental change in Irish history, the day of the marriage equality referendum in 2015, Weddingsonline neglected to post anything on their Instagram about it, nothing on their website either.

The decision to remove us was made by their director. Why after advertising on the site, since 2017, is there now an issue with our Religious Beliefs ? Why does this issue only arise when we asked for a photo of a same sex couple to be added back into an instragram takeover post, which, we paid for as part of our subscription? The director of Weddingsonline was well informed prior to 2011 of our religious beliefs.

All facts in this statement are verifiable in email corrospondance and contracts with Weddingsonline. We will not be commenting further on this as the matter is now in the hands of our solicitors. #weareallequalinlove ... See MoreSee Less

On this day 5 years ago Ireland became the first country in the world to vote for marriage equality amongst all of its citizens. The country came together like no time before and voted in their hundreds of thousands to give everyone a basic equal right.... the right to marry the person that you love, not matter who that was. #weareallequalinlove

Since then Spiritual Ceremonies has performed hundreds of ceremonies for same sex couple. We actually performed the 1st legal same sex marriage in Ulster in the Hillgrove in Monaghan. ... See MoreSee Less

For more information on any of my services please Call me: (086) 1648867  or Email me: info@helenosullivan.com

We use cookies to ensure that we give you the best experience on our website. If you continue to use this site we will assume that you are happy with it.Ok